The incredible power of exercising! (part 2)

As I explained in my previous post, exercise is a very powerful booster of our immune system, and many studies have shown that physical exercise helps fighting cancer and preventing relapse. Here is some more information, that will make exercising easier and joyful.

Does the time/intensity and frequency matter?

In order to explain this, first, we have to understand how the energy expenditure of different physical activities is measured. The doses of exercise are calculated in units called MET (metabolic equivalent). 1 MET is defined as the energy it takes to sit still for 1 hour. On average, this is about 1 calorie (kcal) per kilogram (2.2lb) of body weight. Somebody who weighs 73kg (160lb) would burn approximately 70 calories (kcal) an hour while sitting still or sleeping. This is like the basal level of energy we burn to maintain our body’s functions in a resting state. An activity level of 5 MET burns five times this basal level of energy expenditure.[1]

Although there is no clarity on how many MET represents the ideal rate of exercise per week, one thing seems to be clear: even the smallest effort, such as walking 1 hour per week (regardless the walking speed) does improve wellbeing and can, ultimately increase survival.[8]

One study suggested that 18-27 MET hours per week represents the ideal rate of exercise because that group showed the lowest rate of recurrence and more activity did not lead to increased benefits.[8]  According to another, having a MET score comparable to 6 or more hours of walking in a week showed a 47% higher chance of survival without recurrence.[9]  Other studies suggest that the required dose of physical activity is not the same for all types of cancer. For breast cancer, there seems to be a measurable effect after 3-5 hours a week of walking at normal speed (9 MET a week). For cancer of the colon and rectum, twice as much (18 MET a week) is needed to have a comparable effect. This means walking either twice as long or twice as fast, or ﬁnding activities requiring more effort to replace walking (for example, bicycling at a speed that requires effort adds up to twice as many MET as walking). Finally, to have an effect on prostate cancer, 30 MET a week are required, the equivalent of three hours of jogging spread out over the week. (They can be done in six sessions of thirty minutes.)[1] 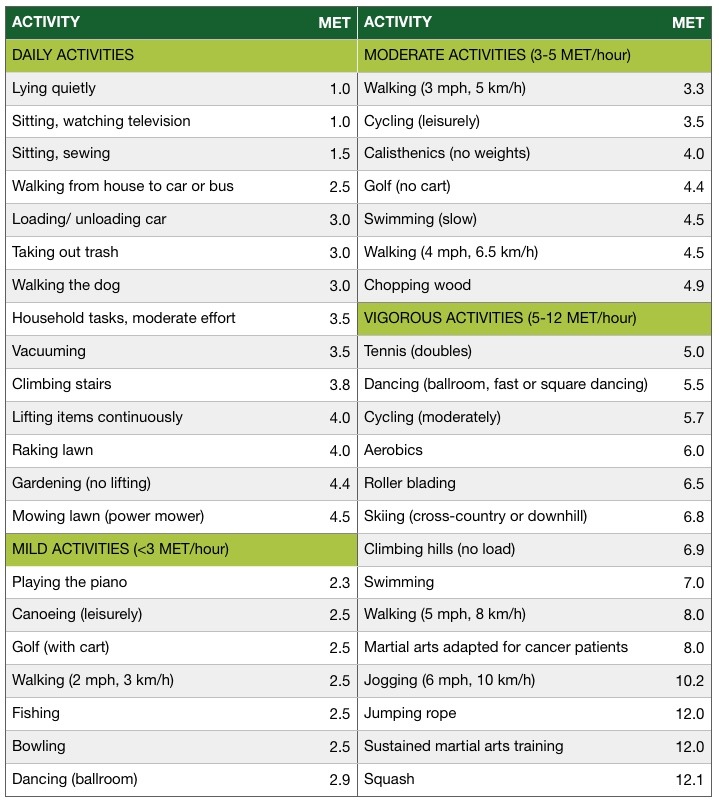 Begin gently. The biggest mistake you can do is doing too much, too intense and or too long. Remember the right way to start is gently increasing the activity and continue to your limit, not beyond! A good feedback your body will give you is how you feel afterwards. Make sure that you feel less tired after exercising than before, not the contrary. Another good tip is if you decided to walk/jog, do not go beyond the speed at which you can still talk, but no longer sing.

Exercise everywhere and anywhere. It is much better to exercise a little here and there during the day, than exhaust yourself in a gym once and never go back. Walk or cycle instead of using transport. Use the stairs rather than taking the lift. Be creative!

Try easy activities. Exercises such as yoga or Tai Chi, which stimulates the body gently can be practised by almost all cancer patients. There is no study indicating that more vigorous activities are more effective, but they maintain attentive contact with the body and its energies. Several studies have shown that they also improve morale. [2-7]

Have fun! The more entertaining the exercise, the easier it is to keep up. In addition, as I already explained in my previous post, joy releases endorphins which, in turn, boost our immune system.

Join a group. The encouragement and support of others make is much easier to stick to a programme. Social activities help to provide motivation when feeling down.

Turn watching a movie or TV into exercise. Use your stationary bike or elliptical trainer while you watch a film, and only allow yourself to watch it as long as you exercise. The hypnotic effect of the film helps you to forget about the passing time. If you stop watching as soon as you stop exercising, then suspense makes you want to go on next day.

Good music always helps. Choose the music you like best, rhythms that motivates you, melodies that activates you and make you feel wanting to move. Try it!

Cheer up and come on! You can do it!

Hydration is very important during exercise and the Integrated and Holistic Medicine now offers  IV drips in London to aid with your everyday hydration needs.

We offer hydration drips such as the Myers cocktail and high dose vitamin c iv. You can browse the iv drips in the iv drip menu.